When I made my trip to Japan and subsequently went to Mint Opa Urawa (the card shop in my cousin's town) I had to pick up a few packs to bust.  There were some packs of this years Flagship Topps as well as some Bowman and some assorted packs from the past few years.  I can get those anytime so I decided to pick up a couple packs of this year's BBM.  I don't think I pulled anything really good since I've looked them over several times but I did enjoy busting a few packs while overseas. 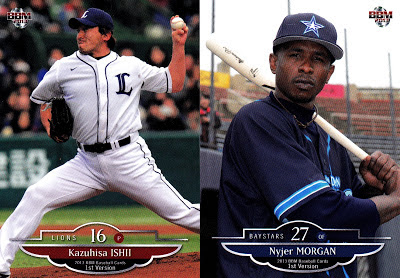 These names should look familiar to Dodgers and Brewers fans.  It's interesting that I got quite a few cards of players that had MLB experience.  Maybe Nyger's time in Japan will chill him out a bit.  I really can't stand the guy and this will probably be the last time you see him on my blog unless he plays for the O's (unlikely) or knocks on my front door offering up free autographs (extremely unlikely). 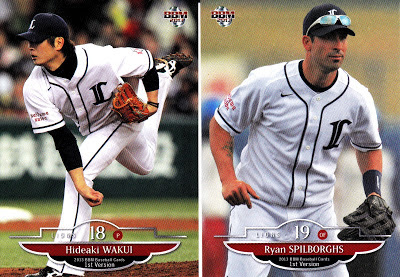 In the 3 packs I busted I got a good amount of Lions who I had just seen play a few days earlier.  Though neither of these guys got in the game I think I did spot Spilborghs in the dugout. 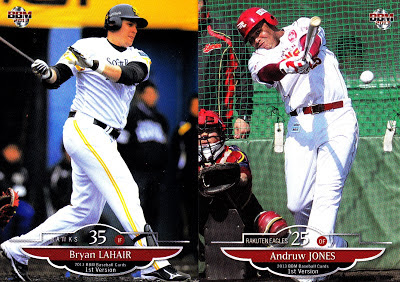 A couple more players with MLB experience.  It's quite strange that Andruw Jones is now playing in the Japanese league considering his past heroics stateside.  I also saw Bryan LaHair play on TV while we were just sitting around at my cousin's house.  We watched most of the game though I understood about 3 words that the commentators said.  Good thing I have a decently high baseball IQ so I could figure out what they were talking about.  Funny thing is about televised baseball in Japan (at least the few that I caught on TV) was that if the game wasn't over by the time the 3 hour timeslot was up, the next program came on.  A show about cooking bamboo shoots was more important than what happened over the last inning and a half of the game.  It was a good 1 inning ballgame too!  I never did find out how it ended up but I did learn all about growing bamboo shoots and how to cook them! 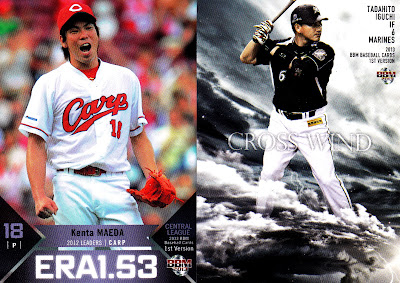 Judging from the numbering on the backs of these cards, these are some of the subsets.  Apparently Kenta Maeda is a lights out pitcher since he rocked and ERA of 1.53 last season.  I think I remember him from the WBC this spring and seeing some highlights.  Tadahito Iguchi is a name that should ring some bells too.  He played for the White Sox and Phillies.  I'm not sure if he played anywhere else.

Overall these cards are really sharp looking.  Each card has full bleed photography (a la Upper Deck) even though these are just the flagship issue that BBM makes.  I think the design is pretty good too.  It doesn't detract from the photography but I do think the addition of the team logo would be an improvement.  I wish Topps could do a set like this (similar to Stadium Club) but they are too good to take suggestions from actual collectors!

So that pretty much wraps up my Japan trip.  I think I'll be back on track here with a couple of pack breaks that I've recently done as well as a couple of trades.  Plus the CSA card show is next weekend and I've been saving my money up for that.  I should have a bunch of stuff to share from the show over the next few weeks.
Posted by Ryan H at 5:26 PM