While I was on my trip in Japan I was hopeful that I would be able to check out a baseball card shop.  I had read about Ryan G.'s experiences with some of the card shops in the Land of the Rising Sun so I did a Google search and luckily there was one right near my cousin's condo.  The shop's name was Mint Opa! Urawa. Ryan had visited this store before so I figured I'd be the second blogging Ryan to visit!  I had my wife and cousin in tow when I went so I didn't get as much time as I had liked to browse the boxes and boxes of cards but I did pick up some interesting items while I was there.  I probably could have stayed in there for a half and day and spent a ton more money but the wifey and cousin probably would have been bored to tears. 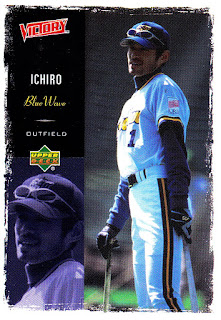 First off I was able to pick up this pretty cool Ichiro card.  If the design looks somewhat familiar to you, your eyes are not deceiving you.  Around the turn of the century Upper Deck made some Japanese cards out of some of the designs they issued for MLB. Speaking of those designs, Here's a few Koji's that utilize a few of the American designs too. 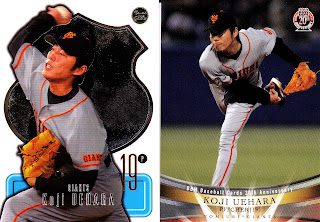 Not all of the cards I picked up were Upper Deck.  I think both of these Koji's are from BBM (Baseball Magazine).  It would be really cool to be able to get all of Koji's regular BBM releases since I have a nice collection of his stateside cards.

I also looked for some other cards of the Orioles Japanese import Tsuyoshi Wada.  While he hasn't thrown a pitch in the big leagues yet he'll probably be there by the time the season is done.  While this looks like 1 card, it is actually 3!  I think these came from the Softbank Hawks team set from 2010 and seems to be an insert.  I'm glad I could get all 3 from the singles box! 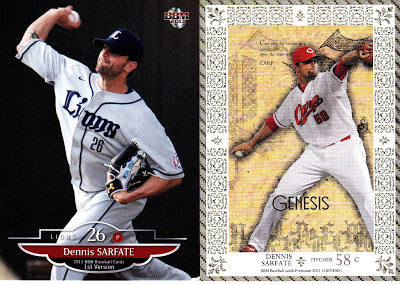 I also found a couple of cards of Dennis Sarfate!  Pictured here is his regular BBM issue from this year and his premium Genesis card from last year when he pitched for the Hiroshima Carp.

Like I said earlier, I would have loved to have more time to browse the store but there was much more to do  in Japan than look thru cards all day.  I have tons and tons of cards that I don't look at home!  I don't have much to compare it to but it took a trip to the other side of the world to find a decent card shop.

I have one more Japan related post coming up so stay tuned for that!

Thanks for looking!
Posted by Ryan H at 3:09 PM