I mentioned last week that I visited Japan for about 2 weeks in late April/Early May.  While I was there I saw many, many cool things including temples, shrines, landmarks, and castles.  Overall it was a very satisfying trip in that I think I got to see how a completely different culture lives.  There are similarities and one of them is baseball!  My cousin lives a little north of Tokyo in a town called Urawa.  My wife and I stayed with her for most of our tripUrawa is located in the Saitama prefecture which is where the Seibu Lions play.  Being a huge baseball fan I really wanted to see any baseball game I could while I was there just to take in the experience.  I choose a Seibu Lions game for a reason which I will explain just a little bit later in this post.

We boarded a train from my cousin's condo around noon to head out to the ballpark and after changing a few trains, we arrived at Seibu Dome.  There were several merchandise stands outside of the stadium as well as food vendors and other team related things going on.  I bought a Lions hat as well as picked up a few pocket schedules to give to some of my friends.  Here is the view of the outside of Seibu Dome: 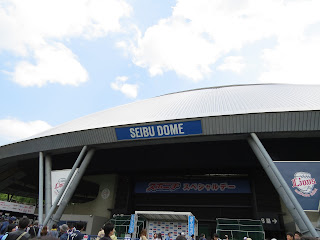 I guess you could say that it's an open air dome some it does have a roof but as you can see from the picture below, you can see there is a gap between the bottom of the dome and the top of the seats.  The stadium itself is kinda carved out of a hill and if you look over the railing out behind the homeplate area, there's a golf course!  Here's the view from our seats: 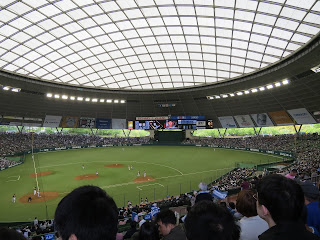 I said above that I picked the Seibu Lions for a reason.  There was an off chance that I would be able to see former Oriole Dennis Sarfate pitch.  Other than that reason, I really had no rooting preference to which team won the game.  I guess by a stroke of dumb luck, Dennis got in the game!  Here's a shot of him warming up in the top of the 8th inning after being called in from the bullpen! 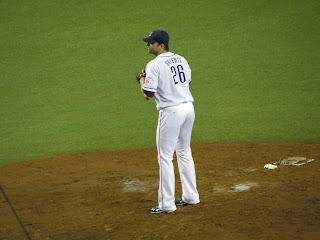 Amazingly enough when he came in he gave up the tying run to the Fighters but limited the damage and finished the inning without giving up any more.  Luckily for him, he was only tagged with a Blown Save but he also picked up the win because the Lions offense scored in the bottom of the 8th to take the lead for good!  How cool is that!  I got to see a former Oriole pick up a win in a foreign country!

After the game, I was able to find Sarfate's banner on one of the lightposts outside of the stadium: 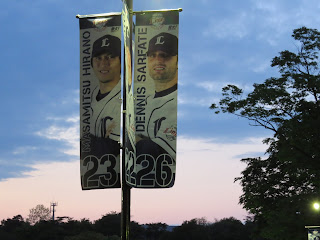 It was a long game ringing in at 4 and a half hours.  It was only a 9 inning game too!  I can't remember any 3-up 3-down innings either.  There were errors, there were, hit batters, there were pitching changes, there were bases loaded jams, there were home runs, there were bunts.  Pretty much anything that could happen on a baseball field happened that day!  Even I, the big baseball fan that I am was getting a little anxious for the game go be over!

All in all it was a good experience and I'm glad I was able to share it with my wife, and my cousin who got went to great lengths to make our entire trip to Japan very enjoyable. 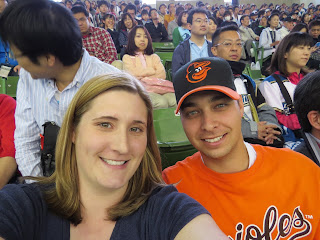